Posted on December 5, 2011 by Stuart Fleming

Imagine coming up with a plan you think will take five years to turn into reality, only to have it drag out for 17 years.

That’s what happened with Geoff Chapple’s vision to create a walking trail that stretches the length of New Zealand. Funding issues, prolonged negotiations for land access, dealing with volunteers and councils and government departments… any of which could have easily been enough for Geoff to throw his hands up and cry “I quit!”

But he didn’t. And on Saturday his steadfast efforts were showcased at the official opening of Te Araroa – the long pathway.

I was excited to receive an invite to the historic event and shall never forget Geoff’s remark as he addressed the crowd: “Three thousand kilometres may seem a lot, but if you have the time you can walk anywhere.” I’d had time that morning to walk from Wellington Airport to Island Bay for the ceremony. 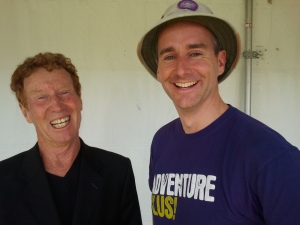 Having a laugh with the inspirational Geoff Chapple, creator of Te Araroa.

The Governor-General unveiled a rock the size of a crouching man, with a large brass plaque attached describing the significance of the spot and what Te Araroa represents. I’m sure anyone who arrives foot-sore and sweaty at Shorland Park will cherish completing their day by touching the stone and reading the words, before hopping down to the water to dip their tired toes.

There was one thing about the day that surprised me. It wasn’t catching up with Rebekah Wright, a fellow hiker I met on the trail a year ago at Kerikeri. It wasn’t being interviewed for TVOne News and appearing briefly in their 6pm segment. It wasn’t even how few Scouts decided to attend the once-in-a-lifetime function. 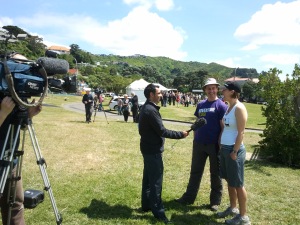 Rebekah (fellow trail-walker) and I being interviewed by TVOne News.

What surprised me was how inspired I felt as I listened to other long-distance hikers as they spoke of the Pacific Crest Trail (4,286km on the western seaboard of United States, stretching from Mexico to Canada) or the Trans Canada Trail, a proposed 18,078km stroll across the massive country, or even the relatively short 1,000km Bibbulmun Track in Western Australia.

Perhaps – one day – there will be another epic adventure of the walking variety?

Just a guy who likes to walk and write.
View all posts by Stuart Fleming →
This entry was posted in Events and tagged kilometres, Te Araroa, walking. Bookmark the permalink.

1 Response to Te Araroa is opened